Back
Casacol > Blog > Plan Your Trip > Neighborhood Guides > Guide to Laureles, Medellín: It's Bigger Than You Think!

Guide to Laureles, Medellín: It's Bigger Than You Think!

TLDR? Laureles is a more authentic alternative to the ultra-hip Poblado part of town.

So you’ve decided you’re a “Laureles person” and want something a little more authentic and gritty than Poblado. But now you’re looking at a map and realizing… this neighborhood is huge.

If you’re going to stay in Laureles, you need to pick a specific neighborhood to stay in. While they’re all safe (this neighborhood is actually ranked safer than Poblado in some surveys) and fun, they have different things to offer depending on what you’re looking for during your stay.

A self-proclaimed “Laureles person” myself, this is an overview of the characters of each zone of la comuna.

An Overview of Laureles

Officially Laureles-Estadio and also listed as la Comuna 11, this neighborhood is one of the most centrally located communities of Medellin.

It runs along the Medellin River’s eastern edge and just south of El Parque Natural Cerro.

If you don’t believe me that you need to narrow down a neighborhood when looking for lodging, consider that Laureles has about 120,000 inhabitants and covers almost three square miles, similar to Venice, California.

To get specific, these are the 15 neighborhoods:

To make it a bit easier, I’ve combined some of the barrios into zones that I feel have more or less the same character. I’ve also included some border areas that aren’t technically part of Laureles.

What Each Neighborhood Has to Offer

Each of the different neighborhoods has something unique to offer.

Are you ready to learn more about what makes each of these places special? Let’s take a look at the different parts of this sector and what you can expect there!

I would characterize this as the nicest part of Laureles and the most similar to El Poblado. There’s less budget lodging but more nice hotels.

You have international restaurants, pricey bars, and even chains like Mcdonald’s, Starbucks, and KFC. Other things to do in the area include:

Stay here if you like living comfortably and cleanly while having access to both international amenities and local flavor.

This area includes the famous La 70 strip and is just south of the Estadio metro station and the soccer stadium. The result is it’s livelier and younger but also louder and dirtier.

There are plenty of places to stay, especially along La 70, but they’re a bit cheaper with fewer amenities. The exception would be towards the south end of La 70.

This is actually where I stay in Laureles, specifically in the Factory Lofts right on the edge of the university. Here the calmer, more upscale atmosphere of central Laureles blends in with the exciting nightlife of Bolivariana so you can access both.

To be honest, this zone isn’t my top recommendation. In my opinion, these neighborhoods have a completely different feel from the rest of Laureles, and the first time I went running through Los Conquistadores, I’d thought I’d crossed into La Candeleria.

In fact, while it’s still not particularly dangerous, Los Conquistadores is the least safe barrio in Laureles. There’s also not much lodging in this zone in general except right up against the university.

The main reason to stay in North Laureles is access to the Atanasio Girardot soccer stadium. You can easily attend the games and the nightlife that goes along with it including a short walk down to La 70.

Most of the hotels in this area are geared towards the games as well with a lot of vacation apartments catering to families who have come to Medellin to watch the games and access the many nearby bars and restaurants.

Other great amenities in this area include easy access to the metro, a number of parks and sports complexes, and the Obelisco shopping mall.

Belen is technically a different comuna just south of Laureles. However, I’m including it because the border zone in northeast Belen feels a lot like Laureles and is still a great place to stay.

Like Central Laureles, I’d say northeast Belen has a suburban feel. It’s not overcrowded and has plenty of local bars, cafes, and gyms. In fact, one of my favorite things in this area is La Unidad Deportiva de Belén Andrés Escobar which includes an extensive outdoor gym and play area as well as an Olympic swimming pool.

Hotels are sparser in this zone, but you can still find some good rental apartments. Stay here if you want a quieter, slower-paced stay.

You might be surprised to learn that La America is also a separate comuna from Laureles to the west. At the same time, La Castellana is the area in the southwest corner of the neighborhood that’s kind of isolated from the rest of it.

I’m including them together because they have the same character in my opinion, which is very residential and suburban.

I wouldn’t suggest staying here, though for a different reason than East Laureles. It’s not that it’s unsafe or dirty, but you’re just so far away from everything else in the area.

Getting to nightlife and bars, cafes, the soccer stadium, and public transportation could take up to an hour.

And, there aren’t that many hotels or rental apartments here anyway. 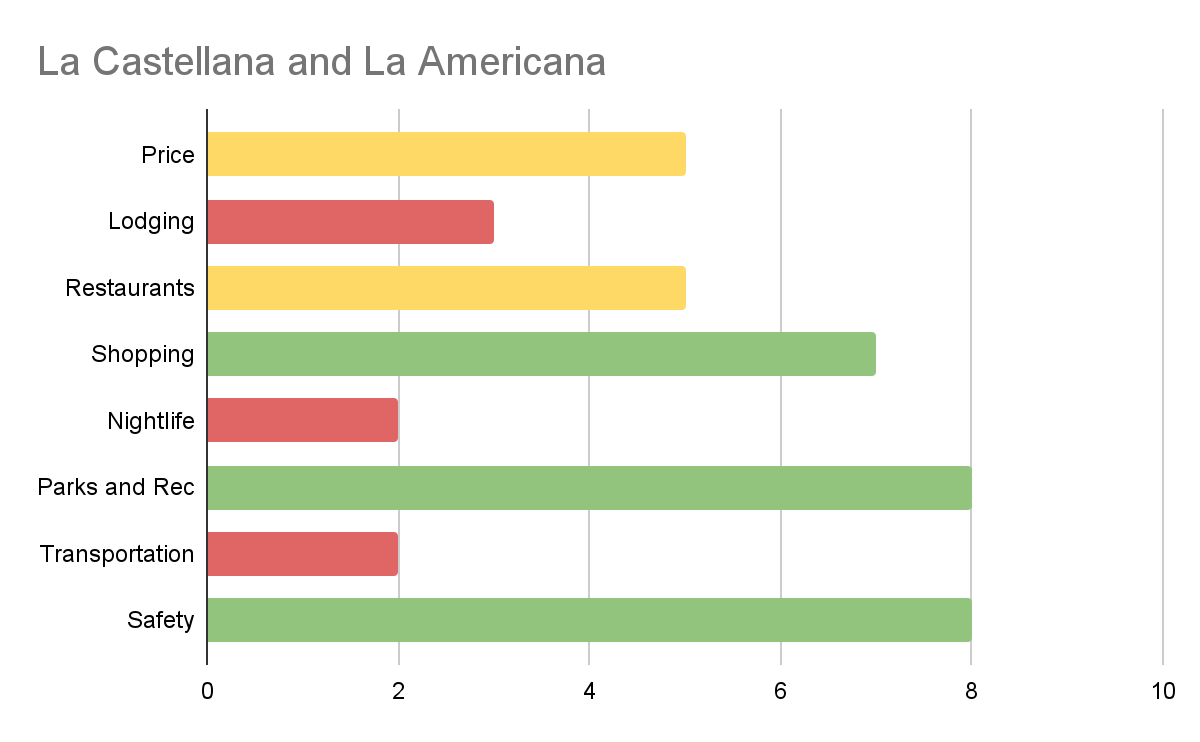 I usually tell people to stick to either central Laureles or Bolivariana/Florida Nueva. My personal recommendation, though? You don’t actually have to pick between the two.

Stay in the Factory Lofts at the southern end of La 70 and you can easily experience both. Plus, there’s coworking, good coffee, and craft beer all in the same building.

If you like this blog, you might like the Casacol Instagram page to keep up with all the new articles. Anything we need to update or correct? Care to contribute? Email us at blog@casacol.co.

Feel free to contact us at any time regarding reservations reservas@casacol.co or investment opportunities sales@casacol.co or by visiting listings.casacol.co.