At Casacol we take our charitable contributions to the city in Medellin very serious and we strongly believe in the motto, "We give where we live." This page will keep a list of the projects that the Casacol Foundation is involved in and contributing to. Casacol clients and followers, whether you are a renter or investor are more than welcome to participate in these high impact activities knowing that there is a significant positive impact to the people involved and the Medellin community.

Maria Fernanda is 12 year old table tennis competitor and a rising young star in Colombian sports. She started playing competitive table tennis at only 8 years old and found a passion for the sport and competition soon after competing in and winning the Girls U-11 Antioquia table tennis competition in 2016. Today she is currently ranked #4 in the Girls U-13 at a Colombian level according her points won during monthly tournaments across the country. However she regularly plays with and beats both boys and girls in the U-15 and U-18 age brackets. What has held her back from scoring higher in the national rankings is the lack of finanical resources to play in every point ranking tournament. Casacol assists with sufficient monthly financial support so that she can play in each and every national competition and begin to play and rank internationally across the region. She will be representing Colombia in the Domincan Republic to compete in the Latin American Table Tennis Competition in October 2018 with our support.

Maria Fernanda is also an accomplished student, ranking not only in the Table Tennis world but also academically. Her plan is to study cardiac medicine at the University of Antioquia, despite being in 7th grade with a well defined plan to get there. The University of Antioquia is known for having one of if not the best and most competitive medical program in Colombia with less than 1 out of 100 qualified applicants being accepted into the program. She told us once, "I basically eat, sleep, study and play tennis, that's my life."

As a side note, Maria Fernanda just happens to be the granddaughter of one of our cleaning staff. We are very proud to help her and her family accomplish her goals for Colombian sport.

Her most recent achivement was at the Campeonato Sudamericano in Cuenca, Ecuador. 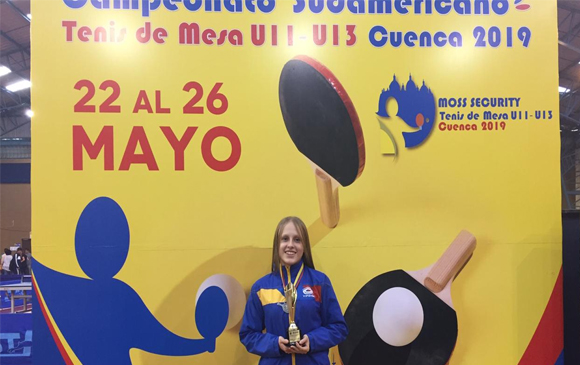